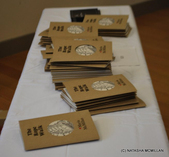 The Rope Walk has set sail
I had a gorgeous launch thanks to everyone who rallied round Helen Rickerby of Seraph Press and me to make it happen. Here is Helen's write up of the launch and full scripts of the speeches, Helen's, Kirsten McDougall's, who launched the book, and mine.

The night I pierced my own belly button
My poem is the Tuesday Poem Blog  Hub poem. It's from my sequence of persona poem,  The Rope Walk, to be launched this Saturday.

The Rope Walk is almost ready to sail
Yes, yes! The launch of my first book, the poetry sequence The Rope Walk, is being launched by local writer Kirsten McDougall at 3pm on Saturday the 13th of July in Aro Community Hall on Aro Street.

Sport 41
I have a couple of poems from The Rope Walk in this lovely issue of Sport. The thrilling  cover features artwork by Kerry Ann Lee who I know as a thinking woman in the activist scene. The cover has topiary elephants and flying motor scooters that remind me of Harry Potter. I think it's Bangkok but maybe because that's the only Asian capital I've visited. Writers Read 2013
My old dear friend Helen Lehndorf, Massey Visiting Artist for this year, and I read and talk about writing, this Wednesday lunchtime in Wellington, and next Wednesday evening in Palmerston North.

A hitching poem in Shenandoah 62 (2)
Shenandoah is the Washington and Lee University Literary Review. I am one of twenty five poets in the February 2013 issue's feature on New Zealand poets.

Magma Poetry 55: The Soul & the Machine
A couple of poems of mine appear in the February 2013 issue of Magma Poetry. It's a print journal but The baby is on the radio is part of the taster on Magma's home page.

Twitter NZ Poetry Night archived on Tumbler
In the last shakes of 2012 Ashleigh Young hosted a virtual open mike poetry night. People read their own stuff and other people's stuff. In a great gush of technological participation, I conquered Twitter and SoundCloud, to be part of it.
Powered by